Singapore (January 1, 2019) WHR —  As one of the most recognizable members in American hard rock icon Guns N' Roses, guitarist Slash played a vital role in rock music's heady years in the 1980's and early 1990's. The genre has since seen better days, he says.

"As far as rock n roll is concerned, it's sort of struggling over these past ten years," the musician and songwriter, who will be back in Singapore to stage a concert with singer Myles Kennedy and their band The Conspirators at The Coliseum on Tuesday (Jan 8), says in an e-mail interview.

"I think rock music has been going through a lot of ebbs and flows. Since, say, the middle of the millennium, it's been pretty quiet. You have a couple great artists that come out here and there, but there's not, like, a big movement where you've got a ton of new music, all very inspiring." 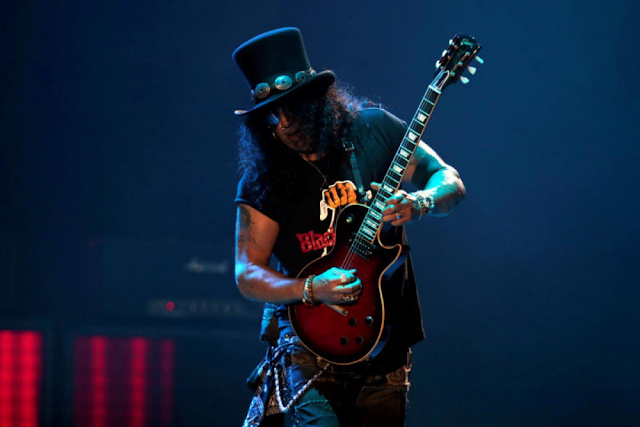 Slash performing in Abu Dhabi, United Arab Emirates on Nov 25, 2018.
While he feels that there is too much focus on Top 40 music these days, the 53-year-old, whose real name is Saul Hudson, is optimistic that the style of music that he plays will make a comeback in a big way in the near future.

"I do definitely feel like there's a renaissance coming, like a rock n roll revolution with all these kids that are doing it right now. There's definitely an energy there so I'm excited to see where it's going to be in the next few years."

And while Guns N' Roses are currently riding high on its worldwide Not In This Lifetime tour, reported by Billboard as one of the top five grossing tours of all time, Slash has also been busy making new music with The Conspirators.


In September (2018), the band released their third album, Living The Dream. It topped Billboard's Hard Rock Albums charts and peaked at No. 4 in the British charts.

He is enjoying the change of pace that he gets with The Conspirators, compared to Guns N' Roses, which he describes as a "behemoth onslaught". He has performed in Singapore three times - with Kennedy at Fort Canning in 2010 and the Singapore Indoor Stadium in 2011, and with Guns N' Roses at Changi Exhibition Centre in 2017.

Of The Conspirators' shows, he says: "It's more of a stripped down, very simple rock n roll band that plays in smaller, more intimate venues and what not. So it's really different."

The upcoming set will feature a lot of new songs from Living The Dream, which he says was influenced by the blues and old rock n roll music that he was listening to at home and in his car. Most of the songs comprise guitar riffs that he recorded on his phone while in hotel rooms and dressing rooms around the world.

He speaks highly of Kennedy, who also sings with rock band Alter Bridge.

"He has a very natural ability. He doesn't try to be something that he's not, which, in this day and age, is very hard to find somebody who's not trying to sing like somebody else or trying to force a square peg through a round hole stylistically with their capabilities."