Nashville, TN (October 25, 2018) WHR —A record label representative says Tony Joe White, the country bluesman and hit songwriter behind such successes as "Polk Salad Annie" and "Rainy Night in Georgia," has died. He was 75. 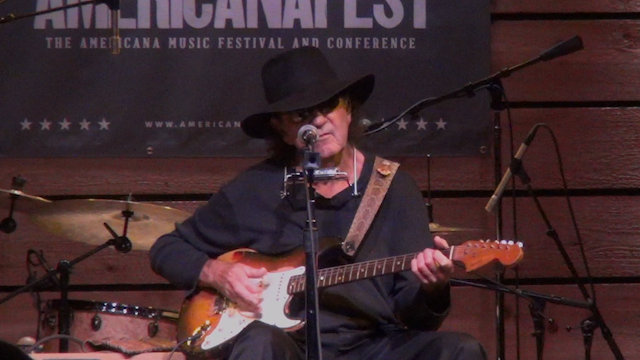 A statement released Thursday from the record label Yep Roc Music Group said White's family confirmed the rocker died Wednesday in Nashville, Tennessee. The label did not have any details on his cause of death. Yep Roc released his last album in September called "Bad Mouthin,'" a collection of blues classics. White, originally from Louisiana, had a hit in 1969 with "Polk Salad Annie" and his songs were covered by Elvis Presley, Hank Williams Jr., Tina Turner, Ray Charles, Waylon Jennings and many more.

In his five decades as a singer-songwriter, White was best known for his swamp rock style mixing blues, country and rock 'n' roll, which earned him the nickname the Swamp Fox especially with his fans overseas.

With his deep growling voice, his song about the Southern greens wasn't an immediate hit, but months after its release it eventually became a pop hit. White told The Associated Press in 2006 that in the late '60s many people thought he was singing about something else. "Back then, people thought polk salad was grass," White said. "They'd bring me bags of grass backstage and say, 'Hey, we brought you a little polk.'" Presley often covered the song in the 1970s and performed it with relish, waving his arms over his head and dancing throughout the song.


He would later record more of White's songs, including "I've Got a Thing About You Baby." Raised on a cotton farm in Goodwill, Louisiana, about 20 miles west of the Mississippi River, he became infatuated with the hypnotic sound of Lightnin' Hopkins and has often cited hearing the song "Ode to Billie Joe" by Bobbie Gentry as his inspiration for songwriting. After the success of "Polk Salad Annie," R&B artist Brook Benton had a hit in 1970 with White's song "Rainy Night in Georgia," which also became a song often covered by other artists. Jennings and White also wrote "Trouble Man," which Jennings recorded in 1989. White worked with Turner on her critically acclaimed and popular "Foreign Affair" album in 1989, contributing four songs and playing guitar and harmonica.

White said also in 2006 that Turner was taken aback when they first met. "She turned around and looked at me and started hysterically laughing and couldn't get her breath," he recalled. "She was doubling over and I thought, 'Are my pants unzipped or something?' Finally she got her breath and came over to me and gave me a big hug and said, 'I'm sorry, man. Ever since 'Polk Salad Annie' I always thought you were a black man.'" Turner recorded his song "Steamy Windows," which was later recorded by John Anderson and Kenny Chesney.

Tanya Tucker, who recorded his song "Gospel Singer," said in a statement that White's writing and voice were both raw and pure. "A big part of the South is quiet now with his passing," she said. "Reckon God wanted a little polk salad!" Shooter Jennings, Waylon's son, wrote on Twitter that his father would often record White's songs or have White play on his records. "He was always the Swamp King living in a modern world," Jennings wrote. "His shows and his style were one of a kind and untouched by anybody else."

Vote for Your Rocks Hall of Fame 2019 Nominees

Badlands of Indiana (October 17, 2018) WHR — Music fans of all persuasions have now been invited to vote in the Rock And Roll Hall Of Fame’s annual Fan Vote. For the seventh year running, fans will be able to have their say in the Fan Vote, with the five artists who receive the most votes making up a “fan’s ballot” that will help determine who makes it into the prestigious Rock Hall. 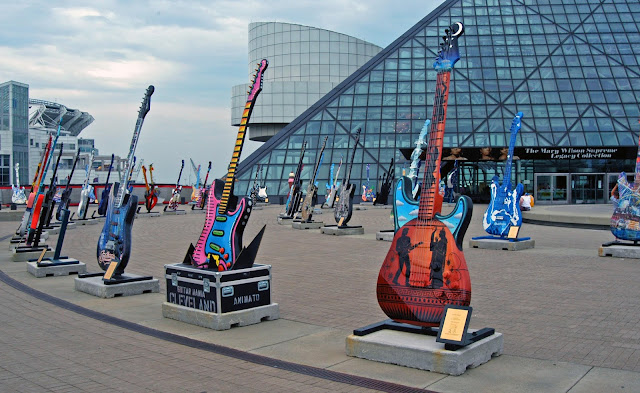 Rock and Roll Hall of Fame

The Class Of 2019 – which includes first-time nominees Def Leppard, Stevie Nicks, Todd Rundgren, Roxy Music, John Prine and Devo – will also be decided by artists, members of the music industry, journalists and music historians. The other influential acts to be nominated for the 2019 Rock Hall are The Cure, the MC5, Rufus featuring Chaka Khan, Rage Against The Machine, Janet Jackson and two acts previously nominated for induction in 2018, Radiohead and The Zombies. Also on the nominees list are Kraftwerk and LL Cool J, both of whom have previously received four Rock Hall nominations.

To be eligible for induction into the prestigious Rock And Roll Hall Of Fame, an individual artist or band must have released their first commercial recording at least 25 years prior to the year of nomination. Several of the nominees have enjoyed high profile success during 2018. Iconic Yorkshire rockers Def Leppard and Journey played an acclaimed co-headlining North American tour across the summer, performing to some of the biggest houses of their career. 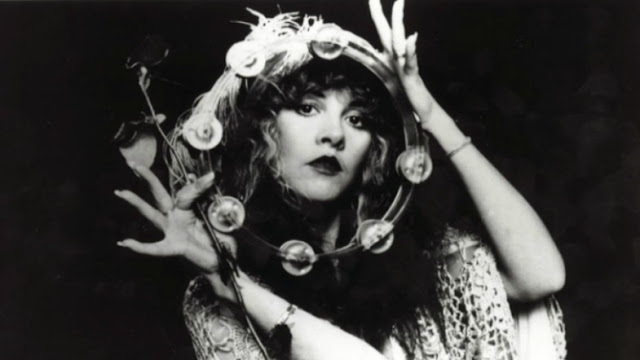 According to reports in Billboard, the two bands playing in venues ranging from 8,500-seat arenas to 45,000-capacity baseball parks. Def Leppard have also recently announced the imminent release of an upgraded greatest hits anthology, The Story So Far, while The Cure have confirmed a series of huge festival appearances for the summer of 2019, including South Africa’s Rock On The Lawns and Malahide Castle in Dublin, Ireland.

As uDiscover Music previously reported, the winners will be announced in December 2018, with the induction ceremony taking place at the Barclays Center in Brooklyn, on 29 March 2019. Ticket information will be released in January. To enter, visit the Rock and Roll Hall of Fame and enter your selections. Hurry, it ends December 9, 2018.

Badlands of Indiana (October 1, 2018) WHR — In the musically-rich history of Macon, Ga., families like the Waldens and Allmans left a huge mark on American rock history with Capricorn Records. The local business with major label ties provided a global sounding board for Southern rock in the 1970’s. Decades later, it remains a symbol of excellence for fans of jam bands, Southern rock and other forms of roots-based popular music that predate Americana. 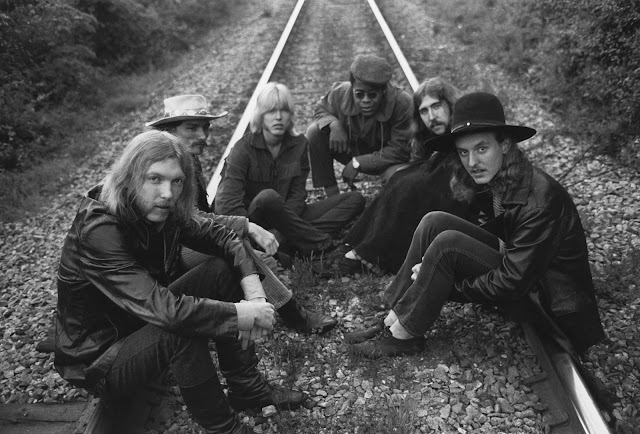 In the 1960’s, brothers Phil and Alan Walden found a niche in the music business as managers of regional R&B talents, including Clarence Carter, Johnny Jenkins and local treasure Otis Redding. Initial plans for a record label that’d revolve around Redding had to be reconsidered after the singer’s 1967 passing.


Duane, his brother Gregg Allman and the rest of The Allman Brothers Band relocated from Jacksonville, Fl. to Macon in 1969 to become the cornerstone for Phil Walden and co-founder Frank Fenter’s Atlantic/ATCO Records-distributed Capricorn Records. The Allmans and their  supporting cast need no introduction as classic rock artists, bluesy proto-Americana innovators or the granddaddies of the jam band scene.

Late ’60s and early ’70s releases by The Allman Brothers, Bonnie Bramblett, Wet Willie and others served as stepping stones for Southern rock as it emerged from the smoky clubs that hosted both country music and the blues. After the smash success of the 1971 Allman Brothers live album At Fillmore East, Walden moved the label to Warner Bros. Despite the 1972 death of Duane Allman and the Allman Brothers’ short-lived 1976 breakup, the Southern rock imprint barely lost a step as the home of  The Marshall Tucker Band, Cowboy, Elvin Bishop, Dixie Dregs, Stillwater and even country singer Billy Joe Shaver.

From outside of the South and Southwest came heavy rock supergroup Captain Beyond, a psychedelic answer to Black Sabbath called White Witch and two of James Taylor’s brothers, Livingston and Alex. Those exceptions aside, the Capricorn catalog reminds us that Southern rock was the Americana of its time–a country and rock-leaning interpretation of regional folk and popular sounds.

Although these acts probably held bluegrass masters, the Rolling Stones, country blues greats and peers like Charlie Daniels in similar regard, each sounded at least a little different from their label mates. For example, The Marshall Tucker Band’s guitarist and lead songwriter Toy Caldwell and Wet Willie’s frontman Jimmy Hall were cut from similar musical cloth, but their bands had separate identities from their label mates.

Changing trends and other factors forced Capricorn’s final distributor of its original run, Polygram, to cut ties in 1979. Walden rebooted the label in Nashville in 1990. The success that followed built around Athens, Ga.’s own Southern-flavored jam band giants, Widespread Panic. Their label mates ranged from Col. Bruce Hampton’s Aquarium Rescue Unit and Lynyrd Skynyrd to 311 and Cake. Kenny Chesney’s debut album In My Wildest Dreams was also released on the label in 1994.

Decades later, the label’s original run represents a creatively free time when hippies and rockers took country and roots sounds to a broader audience as Southern rockers, “newgrass” pickers and members of some of the earliest jam bands.