Badlands of Indiana (March 22, 2019) WHR — Even in the sex and drugs-crazed world of rock and roll, the stories about Mötley Crüe’s Vince Neil, Nikki Sixx, Mick Mars and Tommy Lee were legendary. There were girls, girls, girls, alcohol-fueled riots, fist fights, car crashes, cocaine, heroin, mud wrestling and stadiums filled with screaming fans who wanted more of everything. In 2001, the band proved the rumors true in their X-rated, jaw-droppingly lascivious oral history The Dirt: Confessions of the World’s Most Notorious Rock Band.

Working with writer Neil Strauss, the band told all — the good, the bad, the shocking, the outrageous and even the likely criminal — about themselves and one another. After releasing nine albums, Mötley Crüe had a new chart-topping hit, this time in the form of a New York Times bestseller. 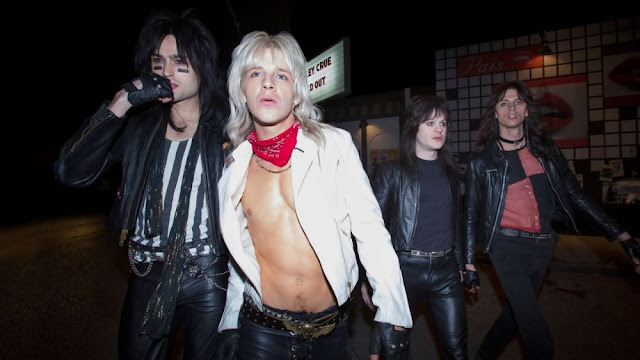 Now, under the direction of Jeff Tremaine, The Dirt has come to Netflix in all its sick, slick and shiny glory. The new film features rapper Machine Gun Kelly as Tommy Lee, Douglas Booth as Sixx, Iwan Rheon as Mars, Daniel Webber as Neil and Saturday Night Live‘s Pete Davidson as the Crüe’s record executive. The Dirt largely stays true to the stories the band tells in the book — though some of them are even more scandalous than the movie depicts.


Here’s a breakdown of the facts that fuel The Dirt:


Did the band’s first show really end in a fist fight?
According to Sixx, this is true. Back in 2014, he told TIME, “The very first show, Vince and I ended up in the crowd in a fist fight! That kind of set a precedent for who we are and what we do.” The incident became a part of Crüe lore as a story of the band’s tough-as-nails, anything-goes attitude.

Did the band’s manager really punch them?
According to Doc McGhee, the band’s longtime manager, delivering the occasional knuckle sandwich was part of the job. “Sometimes punching people is the only answer. I call it full-contact management,” McGhee wrote in an article for The Guardian on his rules of band management. “I’ve had to use it on most of my bands as a last resort. But with Mötley Crüe, full-contact management happened every couple of months. It was more about survival. You’re talking about a band who would physically bite you if they liked you. You’re talking about a band who would regularly attack their own security guard — and he was head of a Hell’s Angels chapter and a black belt in karate.”

Was the band really that girl crazy?
Definitely. In an interview with TIME, Neil explained, “That’s the only reason guys get into music — because you get girls and free beer. It wasn’t about fame or anything. You want to get laid and you want to get drunk.”

Did Nikki Sixx really sleep with his record label rep’s girlfriend?
Mötley Crüe’s A&R man, Tom Zutaut, told The Guardian that he took his girlfriend backstage to meet the band before a gig and “within three minutes” Sixx had disappeared with the girl. When asked by the Guardian reporter to confirm whether the nefarious deed happened, Sixx shrugged. “I’m sure it did,” he said. “But I can’t remember.”

When was Mick Mars diagnosed with ankylosing spondylitis?
While the band’s wild antics were well-known to fans, one of the biggest bombshells when the band’s book was published was Mars’ admission that he had been coping with a chronic, degenerative, painful disease throughout his years with Mötley Crüe. Mars was reportedly diagnosed with ankylosing spondylitis, a form of arthritis that primarily effects the spine and makes it difficult to move, when he was 19. While the disease frequently stops its painful, debilitating progression, Mars wasn’t so lucky. “I have a rare form of the disease that hasn’t stopped, so it’s all the way up my whole back and into my brain stem,” Mars told MusicRadar in 2008. “It’s literally squeezing my rib cage together, so I’ve lost some height. And now that it’s up in my brain stem it’s hard for me to move my head in any direction.”
The chronic pain led to drug abuse and a hip replacement. But Mars maintains a surprisingly positive outlook about the chronic illness. “There are some things about this thing that I’ve got that are not so cool,” he told Classic Rock Revisited. “But there is one thing that is cool — I ended up bent. I can always see my guitar. If I’d been straight then I would not be able to see myself play.”

What was the cause of death of Vince Neil’s daughter?
One of the film’s most tragic moments is the death of Neil’s 4-year-old daughter, Skylar. According to a 1995 story in People, she was diagnosed with Wilms’ tumor, a kidney cancer that affects children. She underwent six operations, plus extensive chemotherapy and radiation treatments, but passed away four months after her diagnosis. “This ordeal is something no parent should have to go through,” Neil told People. “More than that, I wish no child ever had to go through it.”

Did Ozzy Osbourne really snort a line of ants?
Motley Crüe supported Osborne on his Bark at the Moon tour in 1984, at the height of Osbourne’s fame and depravity. In The Dirt, while the band is at a hotel during the tour, a dress-clad Osbourne (played by Tony Cavalero) kneels down on the ground and snorts a line of ants up his nose with a straw, much to the shock of the band. Sixx swears this is true. In an interview with Page Six, he said that while Motley Crüe was a “wild young band” who thought they could compete with Osborne, “you can’t with Ozzy. He won.”

Did Nikki Sixx really die temporarily from a heroin overdose?
Yes. “For two minutes in 1987 I was pronounced clinically dead from an overdose,” he wrote in a powerful op-ed in the Los Angeles Times last year. While it took him several more years to finally get sober, Sixx has become outspoken about ways to combat opioid addiction.

Who was Razzle from Hanoi Rocks?
Another tragic moment in the band’s history came when Neil, while driving under the influence, got into an accident that killed his friend, Nicholas “Razzle” Dingley, and critically injured two other people. Dingley was the English drummer of the Finnish glam rock band Hanoi Rocks. Dingley and Neil had been at a party to celebrate the band’s first U.S. tour when they decided to take a drive and Neil lost control of the car. Dingley was just 24 and reportedly had a wife who was seven months pregnant at the time of his death.
Neil was sentenced to 30 days in jail but released early for good behavior. He was ordered to pay a fine, which even Neil admits was not enough of a punishment. “I wrote a $2.5 million check for vehicular manslaughter when Razzle died,” he reportedly told Blender. “I should have gone to prison. I definitely deserved to go to prison. But I did 30 days in jail and got laid and drank beer, because that’s the power of cash. That’s f-cked up.”

Did Vince Neil really quit the band?
In the film, as the band was working on a follow-up to their 1989 album Dr. Feelgood, Neil stops coming to rehearsal, eventually storming out and announcing that he quits just as Sixx tells him he’s fired. In real life, the band released a statement saying that Neil left because his longtime hobby, car racing, had “become a priority” in his life. But this explanation, which is not depicted in the film, may not have been the truth, either. In a 1992 appearance on Dennis Miller’s talk show, Neil had a very different take on the situation, saying that being kicked out of the band was a complete shock to him. “Two days after my birthday — like, ‘Happy birthday, Vince‘ … Everybody had 25 percent input, so 75 percent voted me out. They’re great guys; they just had to do what they felt they had to do.”

Did Motley Crüe break up?
They did. In 2014, the band very publicly signed a legally binding Cessation of Touring Agreement in front of reporters that prohibits future, unauthorized performances and prevents any of the four members from touring under the band name. As Sixx told TIME, “We just wanted to have pride in the band when the band is done forever. If you put on a Crüe t-shirt and walk down the street we want someone to say, ‘The Crüe, man, those guys came in and went out on their own terms.’”
Whether or not that break-up sticks, though, is still to be determined. The band did reunite to record four new tracks for the movie. Since then, rumors have been circulating that Mötley Crüe will go on tour after The Dirt arrives on Netflix. While Sixx said there would be no one-off shows, he recently told Rolling Stone: “Sometimes I look out at my friends, like the guys in Aerosmith and Metallica, and I’m like, ‘God damn it, did we retire too soon?“ He then added, “Maybe we’ll just get together and jam in Mick Mars’ front room.”

Does the band have any regrets about their behavior?
While the film features some of the band’s wild, reckless, depraved behavior, it barely scratches the surface of the dark, twisted and even criminal behavior documented in the book. When asked about a particular story involving Lee and Sixx and a possible sexual assault, Sixx admitted that they went too far, even though he doesn’t recall the specific incident and admits he may have made it up or embellished it. “There is a lot of horrible behavior in the book,” he told Rolling Stone. “What I can tell you is that we all lived to regret a lot and learned from it. We own up to all our behavior that hurt our selves, our families, friends and any innocents around us.”