Badlands of Indiana (March 17, 2019) WHR — Nearly 60 years ago, surfers flocked to the waves along Newport Beach to try mastering the new craze. When the sun set, they needed someplace to dance and Dick Dale delivered it at Rendezvous Ballroom on the Balboa Peninsula. Nearly every week for two years, Dale and his band packed over 3,000 people into the ballroom. “The energy between the Del-Tones and all those surfers stomping on the hardwood floor in their sandals was extremely intense. The tone of Dale’s guitar was bigger than any I had ever heard,” recalled Del-Tones bandmate Paul Johnson. 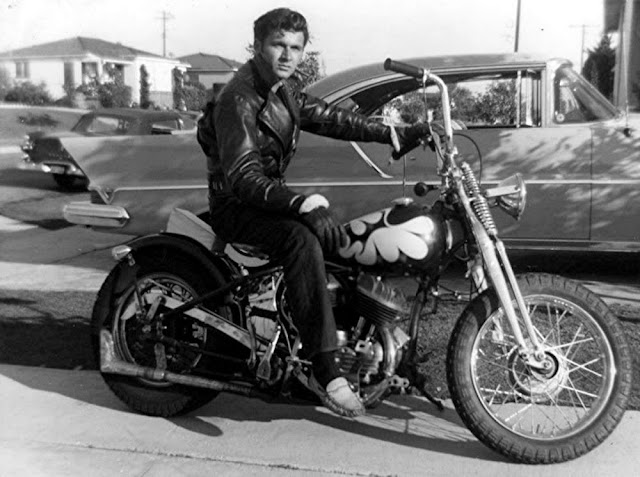 Dale, whose death was confirmed Sunday, manifested a quintessentially Southern California story, forged in surf, sand and rock ’n’ roll. They called him the Pied Piper of Balboa Beach, but his musical instrument of choice was defiantly not a flute. Rather, the electric-guitar playing son of a Lebanese father melded elements of the music of his ancestral homeland with roaring instrumental rock sounds emerging in the late-1950s, and helped pioneer an iconic American genre known as surf music. “When I got that feeling from surfing,’” he told the writer Barney Hoskyns, “‘the whitewater coming over my head was the high notes going dikidikidiki, and then the dungundungun on the bottom was the waves, and I started double-picking faster and faster, like a locomotive, to feel the power of the waves.” Those rushing guitar lines energized generations across the Southland and reverberated around the world.

Dale, who was 81, died Saturday after a long bout with rectal cancer, longtime friend and former bassist Steve Soest said Sunday. That guitar tone arrived via a blindingly fast picking technique, one of the centerpiece elements of his breakthrough hits “Let’s Go Trippin’” in 1961 and “Misirlou” the following year, that caused guitar picks to melt in his hand. A few decades later, director Quentin Tarantino tapped “Misirlou” to serve as the theme to "Pulp Fiction." The sound featured a liberal use of electronic reverb with his signature Fender Stratocaster guitar, cranked to wall-rattling volume through juiced up Fender amplifiers. Other rock instrumentalists charted wordless hits before Dale came to the fore in the early days of the electric guitar, among them Link Wray’s “Rumble” and Duane Eddy’s “Rebel Rouser,” but Dale helped push surf music into the mainstream through those high-energy performances, supplying a sound that paired perfectly with that growing surf craze.


It began as a regional phenomenon in Southern California and soon spread around the world influencing the likes of the Beatles and Rolling Stones in England, and a high-school aged Canadian named Neil Young long before he found fame. According to Hoskyns’ “Waiting for the Sun,” a young Jimi Hendrix was said to have seen Dale and his band play. Echoes of Dale’s fiery guitar runs and showmanship can be heard in Hendrix’s style. Dale was born Richard Anthony Monsour May 4, 1937, in Boston to a father who had emigrated from Lebanon and a mother who was Polish Belarusian. Growing up in a Lebanese neighborhood in Quincy, Mass., outside of Boston, exposed him to the sounds of Arabic music, which became a signature of his musical amalgam. His musical training started with his childhood interest in piano. Early on, he studied trumpet and also acquired a ukulele before eventually picking up a guitar and trying his best to emulate one of his heroes, country music titan Hank Williams.

A friend suggested he call himself “Dick Dale,” rather than Richard Monsour, because it sounded more fitting for a would-be country singer. The Monsour family moved to Southern California in 1954, when his father landed a job at Hughes Aircraft Co. in El Segundo, near the beach. Dale became a regular at the weekly live country music television show "Town Hall Party." "I wanted to be a cowboy singer, so I went on 'Town Hall Party' and entered their talent contest every week," he told the Glendale News-Press in 2015. "And I did, every week." The confluence of Dale’s ethnic heritage and newfound geographic proximity to the beach and to the flourishing factory in Fullerton, Calif., where electric guitar innovator Leo Fender worked, all blended into the music Dale would soon bring to listeners. “Misirlou” represented a cross-cultural blend, coupling minor key motifs and Middle Eastern musical scale with pounding drums and throbbing bass, all fueling Dale’s stinging “wet” electric guitar pyrotechnics.

A section of the song featuring trumpet also brought in an element of the mariachi music that was prevalent around Southern California. In interviews he would often overstate his role in the development of Fender products, but he was an important early adopter of instruments and amplifiers that would change the sound and content of popular music beginning in the 1950s. Dale liked to consider himself one of Fender’s favorite guinea pigs, and he did push guitars and amplifiers to the limits in his live performances. "Playing guitar was only a window in my life," he said in 2015. "I never practiced the guitar and when I'm done playing I just put it down. Music is like building a house. It's like going out deep into the desert to see what nature is doing. It's like painting, like Salvador Dali. I try to do that with my music, make it like a Salvador Dali painting." A freak accident, when hot oil exploded while he was cooking popcorn in 1983 left second-degree burns over much of his body, put him out of commission as a musician for months. “With every problem comes a gift in hand,” he told The Times in 1985. “For instance, when I do shows to raise money for burn victims, now I can talk to them and know what they are going through. And I can tell their family and friends that when the doctor says the recovery has begun, that's really the time they need your concern and love.”


As a celebrity, he capitalized on quirky passions. At one point he kept live tigers at his Balboa Peninsula mansion, which had previously belonged to Gillette shaving company magnate King Gillette, and titled an early-‘80s live album “The Tigers Loose.” That was his first album in 18 years after surf music fell out of favor in the mid-1960s with the rise of the Beatles, the British Invasion, psychedelic music and other genres. A decade ago Dale battled back from cancer, even playing a show in south Orange County shortly after being released from a nine-day stay at Cedars Sinai Medical Center in Los Angeles for treatment of an infection. “I thought, ‘I cannot cause this [club owner] to lose thousands of dollars,’” he said at the time.

That’s when he started trying to promote a new moniker to substitute for the “King of the Surf Guitar” label often applied to him: he wanted to be referred to as “Dick Dale-Cancer Warrior.” With characteristic bravado, he told The Times, he would soon return to the hospital because “everything is messed up, and if it continues that way, I will die. But I’m not ready to leave my son, not ready to leave [his wife] Lana, I’m not ready to leave all the Dick Dale music lovers. They’ve been my medicine.” Although he has not been inducted into the Rock and Roll Hall of Fame, he was elected to the Musicians Hall of Fame in Nashville a decade ago. He experienced recurring brushes with widespread popularity, notably in 1994 when Tarantino used “Misirlou” in “Pulp Fiction.” In 2010, a career retrospective album “Guitar Legend: The Very Best of Dick Dale” also helped introduce his music to a new generation.

Through his life Dale practiced martial arts and explored eastern philosophy, which he often quoted in interviews. "There are four sentences [taken from Eastern philosophy] in my life that I go by: 'To experience is to know. To know is to understand. To understand is to tolerate. To tolerate is to have peace',” he told The Times in 1985. “It took me 17 years and [training with] masters of the martial arts to make me understand what that means. But I understand it and that's how I can put up with all the stuff that goes on. "That's one of the reasons I like working with tigers and lions. If you can understand animals like that, then you can really put up with the reasons why people are the way they are and love them." Dale’s survivors include his wife, Lana, and his musician son, Jimmy. Information on services was not immediately available.