Badlands of Indiana (November 25, 2019) WHR — Iowa City got a visit from arguably one of the most talented modern guitarists in rock ’n’ roll touring today, Marcus King, front man to the Marcus King Band, on November 21 at the Englert Theater.

Before the show, the Englert had hummed with anticipation. A full theater of music lovers had turned out on a chilly November night to see the Nashville music group. 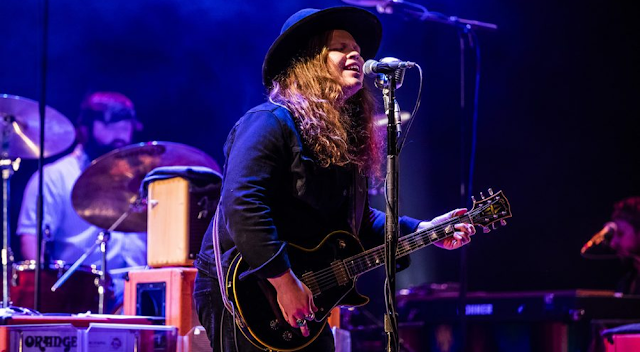 The King Band is a Southern rock, blues, and soul fusion band made up of six members. Singer and guitarist Aaron Lee Tasjan took the stage to warm up the crowd before the band came out. The artist’s music was described as “indie folk grit” by Broadwayworld’s in “Aaron Lee Tasjan to Play at the Rockwood Music Hall Stage, 7/6.”

After Tasjan and his band finished their 48-minute set, the swaggering guitar riffs came to an end. The crowd had already given a standing ovation before the headline act walked on stage, something rarely seen for openers.

Yet even more energy burst from the crowd once the King band walked on the purple- and blue-lit stage.

King stepped into the spotlight and began to sing Son House’s iconic song “Grinnin’ in Your Face.” The famous blues song features a sole singer paired with rhythmic clapping. Even with the bare instrumentals, the audience rose and began to scream in excitement.

The band’s sound is a mix of 1970s soul melded with Southern rock from the same era, with a blues twist. In the grorup’s performance, viewers could visualize silhouettes of past artists such as Stevie Ray Vaughan and Aretha Franklin as the band played.


Though the group draws from past musicians for inspiration, the King Band achieves great nuance in both its musicality and attitude.

The way the band connected with the energy of the Englert was an example of how its sound is so complementary and adaptive, flowing in specific ways depending on the crowd.

The energy in the venue was both electric and bold. The crowd members shot to their feet, swaying and dancing as the frontman sang. “We’re one week away from Turkey Day,” King said early to the cheering crowd. “But I want to say how thankful I am for you guys tonight.”

The band plays a sound from the past for today’s audiences, but with the nuance that only comes with time and a deep love for what came before. Its most recent album, Carolina Confessions, was featured often in the Iowa City set list. The band also featured some earlier songs from albums such as Due North.

The most striking aspect of the stellar rock concert was the way King constructed free-flowing solos for his songs. The way the notes rang out from his guitar almost seemed as though he was having a conversation only he could understand.

After a concert filled with cheering, shredding guitar solos, and an insanely funky horn section, the King Band left the stage, leaving the ringing of songs from both the past and present for everyone in attendance.