Badlands of Indiana (October 31, 2015) WHR — Queen’s classic “mock opera” was released on October 31, 1975, which means it turns 40 years old today. Though the song was met with skepticism when played for preview audiences, it ended up spending nine weeks at number one on the UK charts in 1976. 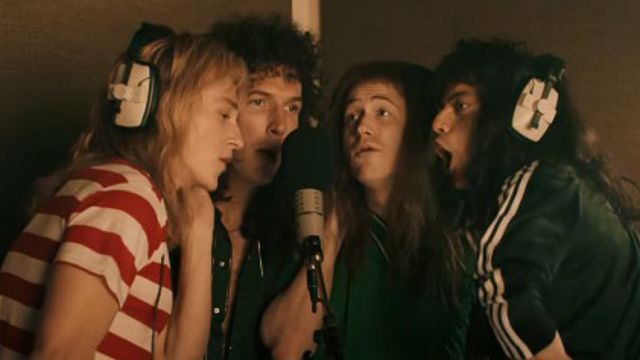 It currently ranks as the third best-selling UK single of all time (behind Elton John’s Princess Diana tribute “Candle in the Wind” and Band Aid’s holiday-made “Do They Know It’s Christmas?”) and was inducted into the Grammy Hall of Fame in 2004. Here are 10 fun facts about the iconic song to consider the next time you’re hitting those “Galileo” high notes along with your car radio.

1. FREDDIE MERCURY STARTED WRITING IT IN 1968. “Bohemian Rhapsody”, or “Bo Rhap” as it is known by Queen fans, had its beginnings in 1968 when Freddie Mercury was a student at London’s Ealing Art College. He’d come up with an opening line—“Mama, just killed a man”—but no melody. Because of the Old West feel (in his mind) to the lyric, he referred to his work in progress as “The Cowboy Song.”

2. THE BAND’S PRODUCER WAS SKEPTICAL OF ITS OPERA-LIKE COMPOSITION. Roy Thomas Baker, who produced the band’s A Night at the Opera album, first heard the framework for "Bohemian Rhapsody" when he picked Freddie up at his Holland Road flat in London one evening before going out to dinner. Freddie led him to the piano to play the song he’d been working on. As Baker recalls the scene, Freddie played the opening ballad section of the tune then stopped and exclaimed, “And this is where the opera section comes in!” Baker laughed at the time, but when Freddie came to the studio days later armed with various pieces of paper with notes and doodles outlining his composition, the producer determined to use all his talent and equipment to capture Mercury’s vision on tape.

3. MERCURY WAS ALWAYS ADDING ANOTHER “GALILEO.” In 1975, “state-of-the-art” recording meant 24-track analog tape. The harmonies on the opera section (all sung by Mercury, drummer Roger Taylor, and guitarist Brian May) required 180 separate overdubs, and eventually the tape had been run over the recording heads so many times that it became almost transparent. In the end it took three weeks (Mercury was always adding “another ‘Galileo’,” Baker explained) and five different studios to complete the track.
4. ELTON JOHN THOUGHT THE SONG WAS TOO “WEIRD” FOR THE RADIO. Prior to its release, Queen’s manager played a rough mix of the song to one of his other high-profile clients, Elton John, to get his opinion. “Are you f*cking mad?” was the singer’s reaction after listening to the nearly six-minute song. His verdict: it was too long and too “weird” for radio.

5. THE SONG’S SUCCESS IS DUE IN PART TO A SINGLE DJ. “Bohemian Rhapsody” owes part of its success to British DJ Kenny Everett, who had a popular morning radio show on Capital Radio. In early October 1975, EMI was still pressuring Queen to release “You’re My Best Friend” as the first single from A Night at the Opera. Everett got his hands on an early pressing of “Bohemian Rhapsody,” with strict instructions not to broadcast it (wink, wink). Somehow, strictly by accident (his finger must have slipped), he played the song 14 times over the course of two days. Callers flooded the radio station and local record stores with requests for the song, so the suits at EMI relented and released the magnum opus as a single.

6. PROMOTING THE SONG PROVED PROBLEMATIC. After it was decided to release “Bohemian Rhapsody” as a single, the band was faced with a bit of a dilemma: At the time in England, it was traditional for bands to appear on shows like Top of the Pops to promote their latest hits. But Queen was scheduled to begin a tour soon, plus (as Brian May admitted) they’d feel self-conscious miming to the operatic section. They solved the problem by filming a promotional film, or “pop promo” as it was called in the industry lingo of the time, that could be shown not only on UK music shows, but also around the world in other markets, such as American Bandstand.

7. THE VIDEO TOOK JUST UNDER FOUR HOURS TO FILM. The band arrived at Elstree Studios (using the same stage they were using to rehearse for their upcoming tour) at 7:30 in the morning, and were finished and relaxing at the local pub by 11:30 a.m. The total cost of the video was £4500, or about $2025. This was the first music video directed by Bruce Gowers, and the success of that clip eventually prompted him to move to Hollywood, where he went on to direct such TV programs as the MTV Movie Awards, the Primetime Emmy Awards, the People's Choice Awards and the first 10 seasons of American Idol.

8. THE “BOHEMIAN RHAPSODY” SCENE IN WAYNE’S WORLD TOOK 10 HOURS TO FILM. The classic scene in the 1992 film Wayne’s World, on the other hand, took 10 hours to film. Dana Carvey didn’t learn the lyrics ahead of time, and if you watch closely you can see that he’s often just randomly moving his mouth while “singing” along. (And all the actors complained of neck pain after headbanging through so many takes.)

9. A SYMPHONIC GONG WAS ADDED TO ROGER TAYLOR’S DRUM KIT. When the band launched their tour to support A Night at the Opera, Roger Taylor’s drum kit was outfitted with a 60-inch symphonic gong (which had to be cleaned, packed, and set up on each date) just so he could strike that final note in “Bohemian Rhapsody.”

10. A BLUE VINYL PRESSING OF THE SONG IS WORTH MORE THAN $5000. The Holy Grail in terms of Queen collectibles is a 7-inch limited edition of “Bohemian Rhapsody” that was pressed in blue vinyl. In the summer of 1978, EMI Records won the Queen’s Award To Industry For Export Achievement (that’s “Queen” as in Her Majesty Elizabeth II). The label’s primary reason for sales in far-reaching territories that lacked manufacturing facilities was Queen, as in the band. To celebrate their prestigious award, EMI pressed 200 copies of “Bohemian Rhapsody” in blue vinyl, each of which was hand-numbered. Numbers one through four went to the band members, of course, while other low-numbered copies were given to friends and family members. Bona fide copies from this original pressing currently sell for upwards of $5000.